This brother-sister duo turned their father’s loss-making business around, seeing 250 pc growth in a year 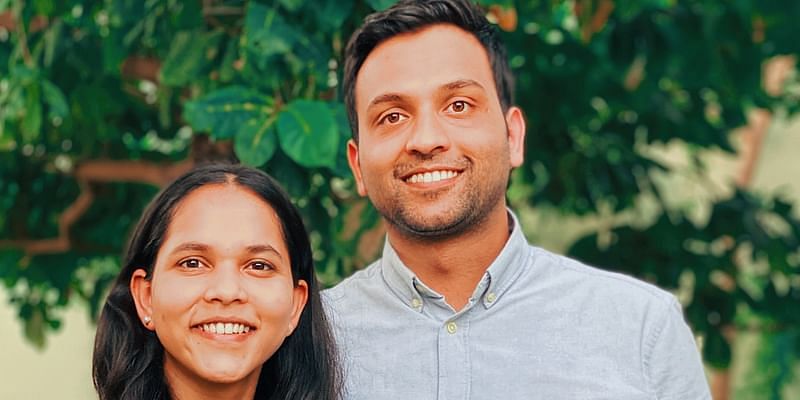 Agnim Gupta and Stuti Gupta left their cushy profession to help their father revive his ayurvedic healthcare business in Gwalior. Today, Amrutam has emerged as an ayurvedic lifestyle brand, and the journey is nothing short of incredible.

Around the mid-2000s, when the ayurveda market in India was witnessing a boom, brands like Patanjali Ayurved and Sri Sri Tattva shot to fame. Around the same time, Ashok Gupta (58), a distributor in a Gwalior-based pharma company, decided to launch Amrutam in 2006 with a vision to bring quality ayurvedic products to consumers.

Ashok, along with his wife Chandrakanta Gupta, set up a small manufacturing unit from his savings to make and sell ayurvedic lifestyle and healthcare products.

Having acquired the knowledge of ayurveda and being in the industry for more than a decade, Ashok had built a good network and a proficiency in doing business. Unfortunately, his business didn’t kick-off and started suffering major losses. But Ashok didn’t give up and kept working consistently for 10 long years.

In 2016, the business suffered a huge financial setback and was on the verge of closure. But destiny had its own plans, and Ashok’s children Agnim Gupta and Stuti Gupta left their profession and came to the rescue of their father’s business.

What restarted in August 2017 by getting one order a month, has now grown to be receiving 4,000 orders per month, with a turnover of Rs 2.78 crore. The company also claims to have witnessed a 250 percent jump in revenue in FY 21.

In an interaction with SMBStory, Agnim and Stuti speak about their father’s business journey, what made him build Amrutam, and their vision to educate people about ayurveda.

Hailing from a low-income family of halwais, Ashok Gupta’s early life was not easy. He started working at the age of 12, doing odd jobs to make ends meet. By the age of 20, he had started working full-time in an ayurvedic company called Dindayal Aushadhi in Gwalior as a distributor.

Being a firm believer in Ayurveda, he read a lot about ayurvedic recipes and acquired an understanding of the ayurvedic lifestyle. In the early 90s, he joined another company called Chirayu Pharmaceuticals and worked there for more than a decade distributing ayurvedic medicines to retailers and doctors in Gwalior and surrounding areas.

Over time, he built a strong network with the manufacturers and other brands. At the same time, he also observed the lack of quality in these products, which disturbed him.

“Our father spoke to the company but his voice wasn’t heard. He left the company in 2006 with a heavy heart and decided to launch Amrutam as a holistic wellness and lifestyle products company.”

Ashok bootstrapped the company and started manufacturing products, but the business didn’t take off. He kept trying for 10 long years, but all in vain.

“Papa never quit distribution back then and I guess that was a right choice, else it would have been difficult to survive,”

When the business was on the verge of closure, Agnim and Stuti decided to step in and help their father.

Agnim is an architect by profession and had a startup in Bengaluru, and Stuti was also planning to pursue her post-graduation from Scotland. But seeing how the situation worsened in the family, they decided to return.

“Our mom had been telling us to join the business earlier, but we didn’t pay much attention. But when we saw the business falling apart, we went back to Gwalior,”

In July 2017, Agnim and Stuti revamped Amrutam and rebranded its products. From supplying herbal medicines to medical stores and doctors, Amrutam started selling premium personal as well as healthcare OTC products online, through their website, and directly to the consumers (D2C). They also repackaged the products and labelled them differently.

Stuti says the company was running conventionally till then. When they entered the business, the first thing they did was to make an online presence. Agnim had tech know-how and he built the website by himself and also took to social media and started posting on Facebook.

Agnim and Stuti were initially worried as they didn’t have any customers upfront. They were just sitting behind laptop screens and waiting for the sale to happen. After a month, in August 2017, Amrutam received its first online order from Varanasi, and since then, there was no looking back.

The choice that matters

As the business was slowly picking up, Stuti says, Amrutam received an offer to partner as an OEM with one of the leading Indian ayurvedic brands.

As they strived hard to deliver the first batch of products, to their dismay, all the glass bottles cracked. Stuti says they then made another batch, but that was rejected by the brand saying they did not vacuum seal the products. After a lot of to and fro, the deal got cancelled and they were back to square one.

“These things were new to us and we couldn’t crack the deal with the brand, but we became more determined seeing the other side of the picture that we were actually making a mark in the market. We stopped ourselves from deviating and started concentrating on building a D2C brand.”

Agnim and Stuti started social media advertisements along with influencer marketing in 2018, which they say garnered them, customers. Today, Amrutam gets around 4,000 orders in a month, and as per RoC, it made sales worth Rs 69 lakh in FY 20.

Stuti says the brand clocked a turnover of Rs 2.78 crore in FY 21 with its products starting at Rs 500.

“COVID-19 gave rise to online buying and we witnessed 250 percent growth in FY 20-21. Considering most brands are solely selling skincare or hair care products in the name of ayurveda, we are a one-stop-shop for both health and personal care products. We also offer online ayurvedic consultations by in-house doctors. The popularity of our healthcare products increased with our ayurvedic malts,”

As Amrutam fell under the category of 'essentials', its operations did not pause for too long during the pandemic. While other businesses stopped running ads, Stuti says the brand increased advertisements 8-10X during the first wave of the pandemic.

The brand has around 1,000 SKUs, and Stuti claims it differentiates from its competitors in the healthcare category by offering ayurvedic malts.

Amrutam now has two legal entities divided into a manufacturing setup and a D2C brand. The factory is being managed by Ashok and the operations of the D2C brand are taken care of by Agnim and Stuti. Amrutam is now eyeing a turnover of Rs 8 crore in FY 22 as a D2C brand.

Challenges and the way forward

Competing with the likes of Kama Ayurveda in the skincare range, one of the major challenges the company faces is finding the right fit for the brand.

“We cannot move our manufacturing plant from Gwalior, and people do not wish to relocate here. This gives us a hard time in finding the right talent.”

Another challenge the company faced was digitising the business process, and it found ERP as one of the solutions, which is now being implemented.

Talking about the future, Stuti and Agnim say they have developed a herbal garden in the empty space next to their factory where they are planning to grow crops that will use as raw materials for their products. Besides, they also launched the ‘Amrutam Recycle Project’ in 2019 where they recycle the waste generated by the factory to reuse. In the near future, the duo would be launching aluminum bottle packaging for Amrutam's best seller products with a refill concept.

This article was featured on Yourstory, written by Palak Agarwal and edited by Megha Reddy. Published on 22nd July 2021.